Ecological Surveys and Reports may be requested as part of your development’s planning assessment. These reports indicate what species may be present on the development site, and if so, what protection they will require through the construction phase. We are experienced in providing ecology reports and recommending solutions to assist in your planning application approval.

Below you will find information about some different types of ecology surveys and services we provide in conjunction with our arboricultural reports. There are three main ecological survey

This is usually the starting point for understanding the ecological constraints imposed on the development by the site itself. It is a comprehensive audit of all the existing biodiversity features on the site – these may include habitats (a place something could be living), flora and fauna, or protected animal species. Included are invasive species, hedgerows, bats, badgers, amphibians, water voles, otters, dormice etc.

Where protected species are identified that may be threatened by the development we are able to recommend mitigation strategies to ensure that the development remains within the confines of the law.

A desk study is carried out to identify any records of rare or protected species. Reports are provided showing locations and all known species existing in or around the site in question.

This type of ecological survey is will work to establish and record the following:

Biodiversity Net Gain is a new type of ecological survey which is set to become extremely significant in building and landscape development. Although not mandatory until 2023, we have begun to see more and more local authorities requesting Biodiversity Net Gain assessments prior to considering a development proposal. So what is it?

The principle behind Biodiversity Net Gain surveys, BNG for short, is quite simple: it requires that developers make plans to leave a site in a better ecological state than when they found it. But how does that actually happen in practice?

First, it requires accurate quantification of the existing biodiversity on a site and the ecological benefits provided by such features. This is achieved using a standardised metric called The Biodiversity Metric 3.1, a detailed description of which can be found on Natural England’s website. After this is calculated, a suitably qualified ecologist will work with the project development team to see which biodiversity features can be retained, which may be lost, and what can be done subsequently to enhance the biodiversity provision at the development site. Finally, if there is still a residual loss of biodiversity on the site, off-site mitigation measures may be considered (such as supporting an increase of biodiversity elsewhere)

Although this seems daunting to some, the early involvement of arboricultural consultants and ecologists can help developers retain key biodiversity features whilst still maximising the value of the development site.

We are more than happy to discuss your requirements, get in touch with us by calling 08000 141330 or via our contact page.

The picture below shows a hibernaculae under construction. 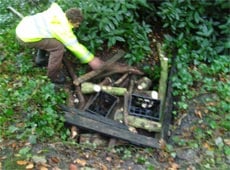 Building a hibernaculae for lizards to confirm to ecological survey recommendations 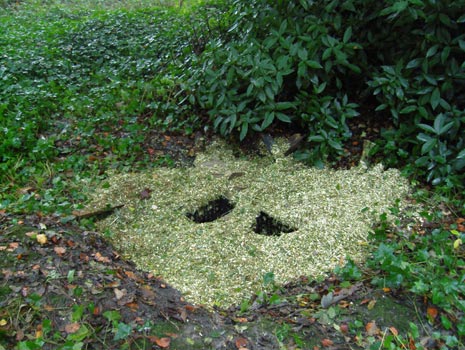 Ecological Survey for planning purposes – a finished hibernaculae for lizards

Other strategies could include Biodiversity Action and Management Plans, Biodiversity Compensation and Offsetting, Invasive Species Action and Management Plans. Each development site will have its own challenges and unique variables which will be considered within the ecological survey and no two action plans will be the same. We are experienced in what will work and what will not. Our experts will make recommendations according to each individual site’s requirements.

"Excellent company to work with. Ivan was very professional and detailed in his survey, giving helpful recommendations and insight in to what would be needed in the Arboricultural Tree Impact report. Emma was very helpful and fast to respond with the report that we need for a planning application. The report was excellent and very detail. Would definitely recommend and work with them again. 10/10 guys."

"Very professional company and Emma Hoyle was very knowledgeable. We received regular updates without prompting which appears to be very rare nowadays. Would recommend them without hesitation. With their help we also obtained the result we were looking for with regard to our tree enquiry which is always a bonus. Great!"

"I have been extremely pleased working with Crown Trees. Emma Hoyle was my consultant and I have to say she is major asset to their business, an absolute joy to work with, quick and reliable. I definitely will be using Crown Trees in the future."

Please fill in the form below and we'll get back to you with a free, no-obligation quotation.

Feel free to leave a message anytime and we will call back at the earliest opportunity.